Warning: Invalid argument supplied for foreach() in /media/ephemeral0/staging.zomia.org/html/custom/plugins/zomia/src/classes/Zomia/NinjaForms/NinjaFormsActionSlack.php on line 763

On Tuesday, voters in the United States will go to the polls as they do every November—and as nearly any literate adult knows, the U.S. presidency is up for grabs in 2020. Four years ago, Zomia conducted a pre-election poll and organized discussions with students. This year, we decided to follow more closely and have some fun as results come in.

By “having some fun,” we don’t mean to imply that the election should be taken lightly. American leadership and policy impact people everywhere. We won’t get into the issues here, but the challenges we face—from climate change to the coronavirus pandemic to growing economic inequality—are daunting.

Yet while we are taking the election seriously, we thought it could be fun to have a set of Bingo cards to use when following returns on Tuesday/Wednesday—so we created some. 😀

Want to skip our explanation and cut to the chase? Download your Bingo cards here. 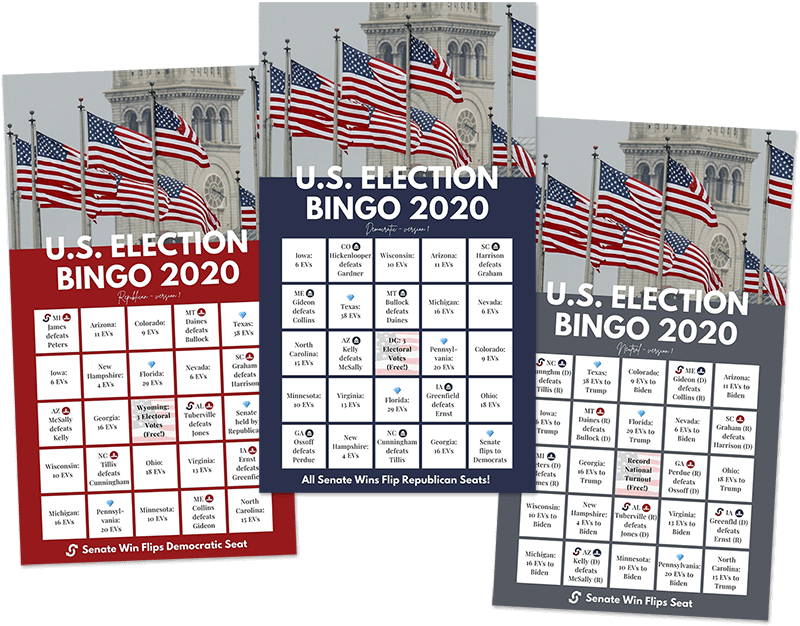 Three sets of cards were created: one for observers pulling for Joe Biden and Kamala Harris to unseat President Trump (the “Democratic” blue cards), another for those hoping President Trump and Republican Senate candidates maintain control (the red cards), and finally, a “neutral” set for observers who don’t have a strong preference.

As results are reported, mark squares with a coin or other marker. Your goal is to fill a row, column, or primary diagonal. (Bingo!) You may want to shoot for multiple “Bingos”—and if you’re particularly partisan, play for a “blackout” where all 25 squares are covered! (Don’t count on this, though—especially if you’re using a partisan card.)

What’s On the Cards?

Six cards were generated in each of the three categories so you can play along with your friends or family and root for the same political team.

On each card are squares representing 221 electoral votes (plus 3 more on partisan cards for the “free” center squares of D.C. and Wyoming). If your preferred candidate wins that state, mark the square. Of course, 221 electoral votes aren’t enough to win the presidency—but these are the states we deemed most “in play” after reviewing the polls.

Included on the cards are states with at least six electoral votes where pre-election polls are closest to an even 50-50 Biden-Trump split. (Poll aggregations at FiveThirtyEight were used to determine which states were “closest.”)

In addition, we mixed in some of the most contentious Senate races. Non-American observers may not be familiar with these races, but they’ll be critical in determining the makeup of the U.S. Senate, in effect influencing how difficult it is for the president to achieve policy goals in the next four years.

Outside the U.S., many are surprised to learn that the president is not directly elected by American voters. Although voters choose a president and vice president on their ballots, the votes are tallied at a state level; it is then up to a set of “electors” representing each state to cast votes in the United States Electoral College to determine a winner.

Each state has an electoral vote count determined by its population. The smallest states (and the District of Columbia—Washington D.C.) are given three electoral votes no matter how tiny their populations. Designated electors cast their votes “on the Monday after the second Wednesday in December”—or December 14th this year.

Yesterday, the Guardian published a nice summary of the U.S. Electoral College and how the process works. This piece includes several helpful graphics—including one depicting how the Electoral College system favors small states over large ones—and explains why neither Al Gore nor Hillary Clinton became president despite winning more votes from American citizens than their opponents in 2000 and 2016, respectively.

A total of 538 electoral votes will be cast—so for a candidate to win, he or she must earn 50% of that total plus one vote. That is 269 + 1, or 270 votes. A few days before the election, here’s a “baseline” electoral map we created, with the gray states included on our Bingo cards: 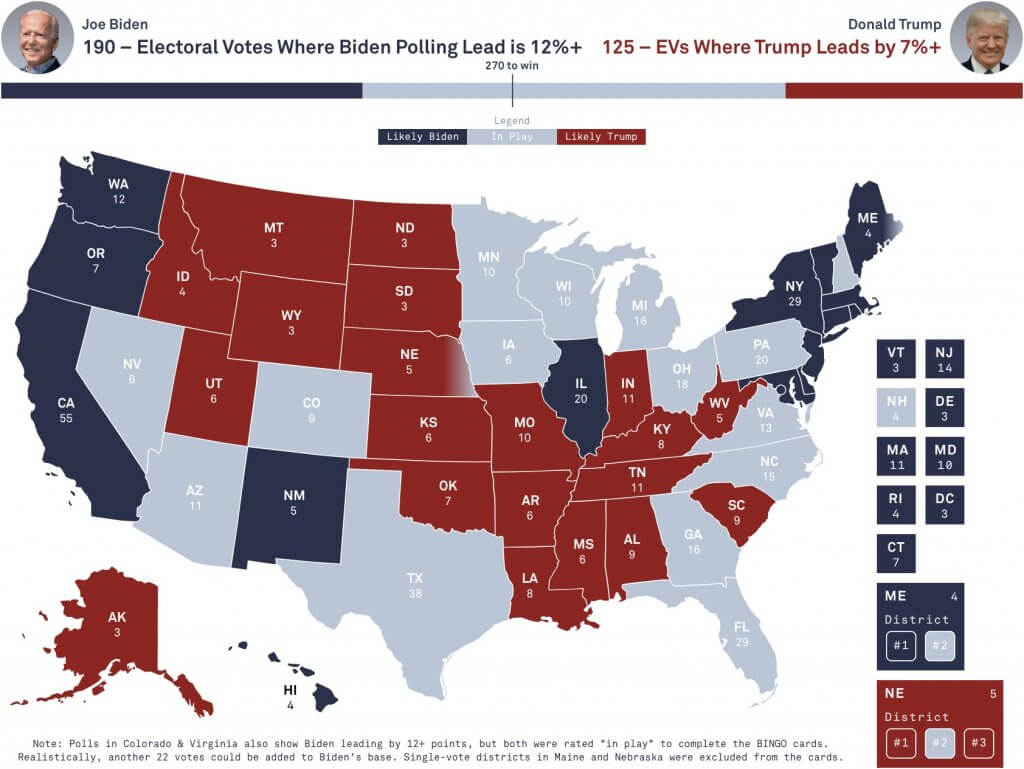 Included on the map are 190 electoral votes we consider “safe” for Biden and 125 that are “safe” for Trump. This does not mean these votes aren’t up for grabs! They’re just states where polling suggests healthy leads for the respective candidates. (For Biden, all safe states show him polling ahead of Trump by at least 12 points; Trump is polling ahead by 7 points or more in each of his safe states.)

If you don’t want to do any printing, we worked up quick electronic versions of our cards as well. Links below. 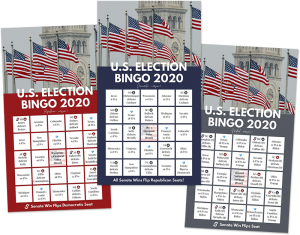 What Your Bingo Cards May Tell You

The 2020 election is unprecedented in various ways—from the effects of the pandemic to the way the Republican Party has been transformed by President Trump. Given dramatic increases in mail-in voting, results may be slower to come than we’ve seen in the past. Although it’s impossible to know what will happen, there are a few key things to watch for as you play your Bingo cards.

What if a Blue Card Yields Multiple “Bingos”?

If your blue Bingo card yields multiple Bingos, it means the pre-election polling was pretty accurate and signals a good night for Democrats. Beyond the actual rows and columns, if you see over 50% of squares filled, it’s likely that Joe Biden will be the next president and the Senate will flip to Democratic control.

Although a “blackout” is unlikely, if polls are accurate and the political winds shift against President Trump, near-blackout results are possible on the blue cards. Even the most Trump-friendly states on our cards show polling margins in his favor that fall within the margin of error.

What if a Red Card Yields Multiple “Bingos”?

Conversely, if you’re rooting for Republicans and start seeing multiple “Bingos” on a red card, there’s a good chance Trump retains the presidency and the Senate remains Republican-controlled. With 50%+ of squares on a red card filled, we’ll conclude that polling was inaccurate.

Even if the polls are off, it remains unlikely that anything close to a “blackout” will be possible on a Republican card.

What if a Gray Neutral Card Yields Multiple “Bingos”?

If current polling is accurate and there is no strong shift toward either party or candidate, “Bingos” are more likely on the neutral cards than the partisan versions. Outcomes on these cards closely follow polling advantages as we approach election day, with only occasional variation mixed in on the closest races.

A gray card with over 50% of squares filled would still suggest a Biden victory, as he goes into Tuesday with a clear polling advantage.

Donate to Support a Student

Don’t need repayment or prefer a tax receipt? You can donate funds to support our students thanks to our fiscal sponsor, Partners Asia.

Thumbing through an in-flight magazine on the way

Whoops. Nothing here for you!

This feature is available to registered lenders only.